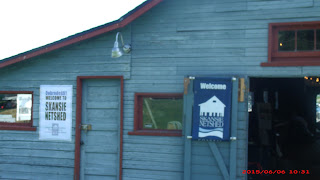 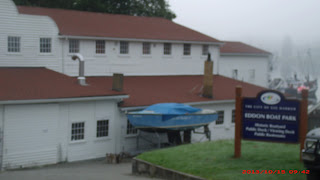 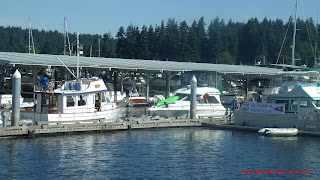 One of the Marinas in Gig Harbor

I figure we can be serious during the week encouraging one another on to be the best we can be however the weekend is a good time for old fashion fun and having a happy one.


Here in northwest and Western Washington we are having a nice sunny weekend. The temperatures are in the mid-60s up to low 70’s. I know for many places this is normal for April unless you are in Colorado where it is snowing. Here we call it a time for a party because the temperatures are usually more in the fifties. Here we take off our jackets by noon while other places think we are crazy in doing so.


On Saturday morning I took my usual walk around Gig Harbor waterfront. It was nice though slightly cold because of a little wind however something I could handle. I knew by the time I was finished I would be quite warm which turned out to be the case.


First I went by Skansie Park where you see net shed where the Skansie brother’s way back in the day would gather nets onto their fishing boats getting to go north for the summer. The Park is used for people walking around along with having farmer’s market on Wednesdays while having concerts Tuesday evenings throughout the summer. This day I saw the teenagers going through some exercising and getting ready to take out their kayaks onto the harbor. They are one of the best kayak groups in the nations.


Next to Skansie Park is Jerisch Landing where there is boats tied to the dock. People will be taking off soon to enjoy the day in their boats. Walking north along the waterfront next is several marinas with lots of boats. I expect busy places in the next few hours.


Walking another block or two are small shops that visitors can go in and enjoy. Two new buildings are in process where businesses will occupy them in the next several weeks.


Next you come up to a deli where you can get donuts along with sandwiches. There are people hanging out right now. Next to the deli used to be able to get your nails done. They have moved to another location and a new evening restaurant will be opening in the spot in the next month or two specializing in pizza and beer. Not sure of the name yet however they will be open from 4 pm to 9 pm.


Continue walking north there is another small park you can visit to and then there is a new house being under construction next to another net shed. The next place is Eddon Boat. It is now owned by the city of Gig Harbor and was originally by Ed Hoppen whose son Guy runs it when he is around. He spends the summer fishing up in Alaska like so many others. In his case a family affair since his children are involved as well. At Eddon Boat there is a nice gift shop along with a boat shop. You can actually see people building boats especially on the weekend. Actually if you want to you can get a small boat built yourself all you have to do is ask how.


You continue walking around the harbor there are more places to see including small restaurants that you can eat at that have delicious food including sea food. A must whenever you come to Gig Harbor.


There are so many other places in Western Washington to visit on the weekend as well. Many of the towns have waterfront to walk around too. Going to Seattle there is the waterfront and the Pike Place Market is only a few blocks away where you can walk or take a taxi. The Space Needle and all the other places near it are not too far away either. Having a Happy Weekend works well here in Western Washington; enjoy yours too.