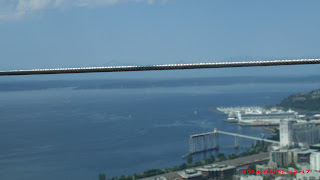 Looking out on Puget Sound from the Space Needle


Most of Western Washington the water is on the Puget Sound. Seattle is the major city that is on Puget Sound.


Where I live in Gig Harbor is an inlet to Puget Sound. So when you go out on a boat from the Harbor you are than on the Puget Sound. It goes for many miles starting from Olympia in the south up north to Whidbey Island.


When I was young our family including some cousins we took a trip by sailboat up north to Victoria and then east to the San Juan Islands. It was one of the most exciting trips I was ever on with the wind blowing hard in the Islands and the boat leaning over.


My parents were members of the Gig Harbor Yacht Club. One year my dad was commodore of the club. I never thought he would be because it doesn’t seem to be his kind of thing but he did enjoy the time. The best part of being commodore is meeting ones from other clubs. So I learned the names of many of them in the area. I would say that most members of the yacht clubs have motor boats but some like my dad only had sailboats.


My dad was introduced to sailing when he was a teenager. His brother Bill and he found a sailboat that was left on dry land. I can’t remember where exactly he told me where they found it but it was not far from Gig Harbor. Since that day outside of his family boating became his love. He spent many hours sailing boats including being in races. He and his brother built several boats over the years. In fact his last boat he built on a property I had at the time. He was only able to sail the boat a few times before he died. His brother though designed several boats and was in the boat business for several years however was not very successful. In fact it cost my dad some money in helping his brother out. I would say he should have stayed in the designing of boats but some people just have to go further though they don’t have the talent to do so.


Though the trip to Victoria and the San Juan Islands was the highlight of our sailing adventures we did go on quite shorter sailing trips. Primarily up to Seattle and over to Bremerton where the Naval Ship Yard is located; sometimes the wind seem to die and it took a lot of time to get over to Bremerton. Being a young guy sometimes the time seems to go forever especially when you are hungry. Dad would not feed us until we arrived. I am not good on an empty stomach I got tell you.


Besides Seattle, Bremerton and the San Juan Islands there are a lot of other places to visit on the sound. In fact you could spend almost every weekend for a lot of time exploring so many places. Though I have been to some there are many others to go. I am sure there are other natives like myself that have not gone all the places on the Puget Sound. If not by water most of the places can be driven by car.


The great part of being out on the open part of the Puget Sound like between Seattle and Bremerton smelling the sweet air and seeing the land on the distance.  Most of the cities in Western Washington have beautiful waterfront to visit and walk around. Come some time and enjoy yourself.
on January 10, 2017