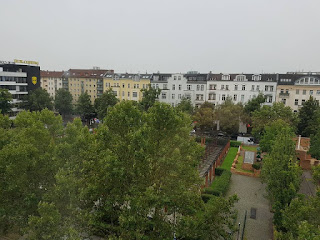 picture of Berlin out of Ken's hotel room

My nephew Ken right now is on vacation in Berlin, Germany. It is the first time that he has traveled anywhere in Europe.  I am sure they will be very happy times for him.


It reminds me the time I spent in Berlin myself just a short time after the wall went done. So that was about twenty-five years ago. It was nice to go to a place that history had just occurred. I spent a couple days traveling around Berlin. The memories now are a bit vague because it feels like a lifetime ago.


Just like Ken it was my first trip to Europe. My brother Jack and his wife were living in Frankfurt. Ken’s cousins Leslie and Robby were quite small. I actually started my trip by going to London for a couple weeks then on to Germany. I had a eur rail pass so I traveled around by train unlike Ken who was able to fly into Berlin.


After spending time with my brother and his family I went to Berlin first and then to Munich before returning to Frankfurt. What I remember most was how old and run down the buildings in eastern Germany looked to me. Also I met several college girls while in Berlin. They were traveling throughout Europe before returning to California. They had been going to college in Finland.


Another thing I remember when I checked into my hotel room in Berlin the clerk and several other people gave me weird looks. I think it was the whole American thing and since the wall had just come down I am not sure they knew how to interact with me. I know that I was getting negative vibes however I wasn’t going to let it ruin my trip.


Like many places around the world I am sure that Berlin has changed a lot in twenty-five years. I look forward to hear from Ken about his trip to Berlin. So far he has posted a few pictures from his hotel room. Right now it is afternoon in Berlin so I am sure he is out exploring as many places as he can.


When I am not able to travel it is always nice to hear the adventures that family and friends go on. Always great get to know the world around you; another great part of enjoying life to the fullest.