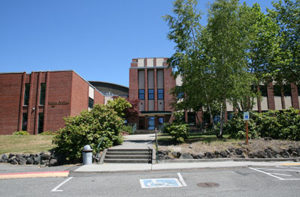 
On Tuesday night I went back to my high school for the first time in many years. My church decided to have their Tuesday night prayer meeting there because a couple weeks ago two young men students were both killed. The first one was on the Thursday night where he was hit by a car. He was walking along side of the highway in nearby Key Peninsula. The second young man was in a car accident as a passenger in another nearby town of Olalla. It took place on the Sunday morning.


A school and city can be rocked enough by one young person being killed however two is even worse. Most of the students at Peninsula High School where I attended new both them and I am sure many were close to both. I can’t imagine what they all have gone through along with family and close friends.


So my church asked and received permission to pray for the families of these two young men along with the students of Peninsula High School and the other high school Gig Harbor in the community along with the middle schools and elementary school. We prayed about their sorrow and grief along with the questions they have. Also that none would consider suicide either. We spent about eighty minutes for them all. We met in the school’s library because we felt it was important to pray where these young men attended school.


It had been many years since I have been in the library of the school. In fact the school has been remodeled at least once or twice. The library looked so much smaller than when I went to school. The original library in that location was built during my freshmen year.


The cafeteria that is a couple minutes away walking down the hall looks much bigger than when I attended. Off to the right of the cafeteria and then left is still the same classrooms that I used to spend my four years of school there. My English and history classes were in that spot. The only difference is the school office is no longer located there.


So many memories came back to me during that time on Tuesday night. I would have to say the good, bad and the ugly. I am sure most of you remember you high school years. Trying to figure out life and dealing with the other students especially the opposite sex. Most of my four years at the time were spent in that big box. Some of it I liked while other parts I have no problem forgetting though they helped build me into who I am today. So Peninsula High School it is nice that you are still around shaping lives with the good, the bad and the ugly. I am sure the walls have a lot to say if only they can speak.