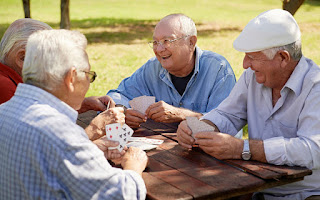 Enjoying time with others


Most of us at least here in the United States we have heard a saying or proverb or whatever you want to call it “It takes a village to raise a child.”


I am sure in some cultures that is what really goes on though I don’t really believe in it because the parents are responsible to raise their children and this saying in some respects takes that away from the parents or gives an excuse why they are not raising their children.


I am not writing this though about raising children it is about community or village where we should spend time together. I would prefer that people spend time in small groups that range from six to twelve people. Many people don’t feel comfortable being groups any larger than twelve. I know that I am one of those people.


On Saturday I went to a men’s breakfast at my church. We had around fifty men at that breakfast which is pretty good I would have to say. We had three long tables that had around fourteen men sitting and a couple round tables for a few that showed up late. Although I would call that a big group I spent most of my time before and after my meal to talk with about four or five men so for me we were in twelve small groups.


The importance of small groups whether they are at your church or work place or neighborhood is that we should not be isolated from each other. There are some especially men who prefer spending time by themselves or their families. Of course a family is a small group which it is important to spend time with since I did say the parents are responsible for how their children are raised but it is vital for us to spend time with others besides. You can call it a support group or a social group or whatever. The importance is to be able to share your life with others and I hope learning from them. Though when we become adults we don’t need to be raised but we do still need community even if it is at its lowest denominator.


So spend time with a friend or a group of friends where you can be heard and listen to others as well. We need to know that others actually care for us. It is important that everyone gets to share without someone dominating the conversation. Whatever we hear and learn another thing is we can laugh together as well. So whether you meet with a group every day or week or twice a month put yourself out there. You may surprise yourself how much you can learn and contribute. This way we all become better people.