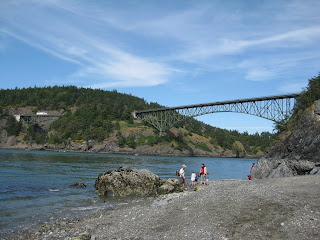 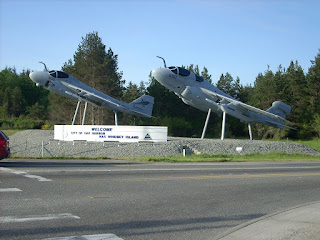 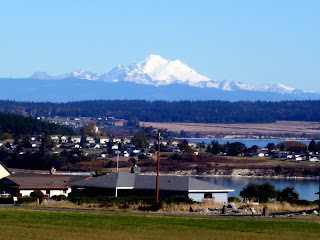 Oak Harbor with Mt. Adams in the back


I have decided to write about different places here in my home state of Washington at least once a week. Many will be where I have visited as well as other places I would like to see as well.


On Saturday I talked with my cousin Peggy who lives in Oak Harbor. She recently did a mission’s trip to Africa with a group of young people. So we talked about her trip along with my family and other cousins. She and her husband Cal live a few blocks from their daughter Erin, husband Dan and three children. For a while they lived in Winthrop, Washington which is in Eastern Washington and I will write about it another time though it is a very popular destination for people here in Western Washington to go visit.


Let you know more about Oak Harbor it is located on Whidbey Island and is about an hour a half drive north and west of Seattle. The population is in the mid twenty thousand range; so more than twice the size of Gig Harbor. There is the Whidbey Island Naval Station located nearby which I have visited a couple times. I find that to be a great place to go when visiting Oak Harbor and the vicinity.


There are a couple ways you can get to Oak Harbor by ferry. Just north of Seattle you can take the Mukilteo to Clinton and on the Olympic Peninsula Port Townsend to Coupeville. Port Townsend is another good place to visit as well. Both ferry rides do not take that long to Whidbey Island.


Another way get to Oak Harbor is drive north from Seattle on interstate 5. Take exit at Burlington that heads west toward Anacortes to take the ferry to the San Juan Island. About the same location to head north to Anacortes you can go south to Oak Harbor. Actually the drive from Seattle is probably faster than taking the ferry. Also it is a very nice scenic drive as well. When you get onto Whidbey Island you will first go over the Deception Pass Bridge. A very nice place to stop for a little while to relax and eat a meal; however the bridge is very deep and Oak Harbor is only a short distance from the bridge.


Besides Deception Pass and the Naval Station you can take a lovely drive around the island including going through Oak Harbor. Also if you have a bike a really nice place to find some trails to ride as well. Definitely a great place to visit for the day or longer. Let you know to that it does not rain a lot there either. The annual rainfall is about twenty inches a year.


There are a lot of other nice places in that whole area of Western Washington to visit if you are spending several days in Seattle. So come and see the western part of the state of Washington anytime especially in the spring, summer and fall. Next week I will write about another place in western Washington.
on June 28, 2016