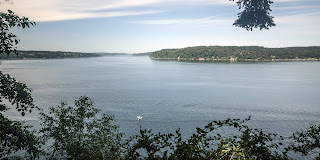 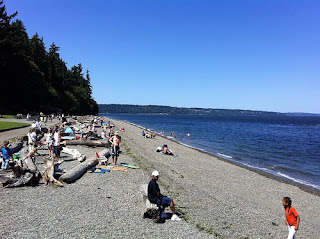 
When September began and the kids had to go back to school it rained. Now we are in the middle of the month the temperatures are in the mid to upper 70s. Here in the northwest and Puget Sound we call it Indian summer. It is where the sun is out and feels like summer although fall is about to arrive along with the temperatures not hitting ninety. Other words it is the time of the year I really like a lot.


This may only last a few more days since it forecasted to rain over the weekend. Poor kids they have to look outside seeing the sun shine while in their classroom and they are looking forward to the weekend where they may have to deal with rain. On the other hand I remember as a kid the rain did not bother me that much unless there was a downpour than I had to wait for it to end. Yes kids are resilient if they have made up their minds what they want to do. Of course they have to deal with parents who may have other ideas about being outside. I fortunately had parents that said I could be outside as long as I was careful and wearing the right protective gear. Sometimes I go outside without telling them to. Yes that was the kind of kid I was. I did what I felt like doing as long as I could get away with it.


The only downfall during this Indian summer it is getting darker sooner around 8 pm. So you want to enjoy your wonderful day you must get it done earlier unless you don’t mind being out in the dark. Like I say it is the best time of the year as far as I am concern. So in Western Washington vacationing here is a good idea. Not only is the weather nice and not too hot with little rain once in a while the children are in school so the sights are not overcrowded. Tuesday I was driving south on Soundview up from downtown Gig Harbor and off to the left was majestic Mt. Rainier in all its glory with Pt. Defiance Park and Zoo/Aquarium in front of it. A great place to visit by the way during the day when the kids are in school and further left was Vashon Island which is a great place to visit. You can take a ferry ride from Pt. Defiance which is about twenty minutes long. If you have a bike it is a really great place to visit and ride for several hours before getting back on the ferry for your return. In-between Vashon Island and Pt. Defiance in the distance I viewed more of the Cascade Mountains. What a view seeing that sight which I do frequently.


Besides the temperatures being the seventies it is nice to feel a breeze that is not too cold. Of course you can wear protective gear for that to if you feel necessary. I feel so fortunate to live here especially this time of the year. I know that October is coming up and then the raining season. I hope that we get some snow this December. It has been a few years since we have gotten more than just a couple inches of snow. I am sure we could get a good amount of snow this year if we don’t have another mild winter. I hope it is more than a dream. I will keep you posted. So come and see us here in Western Washington. Again you can enjoy a wonderful Indian Summer in September.