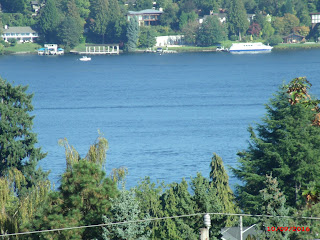 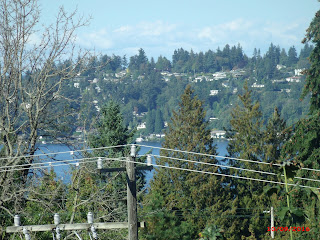 Lake Union between behind the trees


On Last Saturday I went to my cousin Bronwen’s memorial service in South Seattle. It was so wonderful hearing stories about her that I had not heard before and those that I had from long ago. Also seeing her sister’s Lorna and Jennifer along with her husband Hank; there was a nice crowd so I did not talk to them as much as I would have like to but that happens. Also there was a nice turnout of my other cousins who were Bronwen’s as well. Got to see cousins from her mother’s side of the family too; I had not seen them in many years. I enjoyed meeting a few friends that she grew up with as well. She was a special cousin to me and it was so nice to see all who loved her as much as I did.


The memories brought back to me were the trips our family made to Seattle several times a year especially during the holidays and the summer. Also the times Bronwen and her sisters came to Gig Harbor for a visit along with going to Bellingham to see our other cousins. My cousin Jim still lives in Bellingham. He looked well and he designs landscaping for people in the Bellingham area. His sister Peggy was there as well and she now lives in Oak Harbor on Whidbey Island about an hour and a half drive from Seattle.


My drive to Seattle takes about an hour depending on the traffic. The hardest part of traffic is going through downtown Tacoma on Interstate 5 because of construction. They are in the process of adding a couple more lanes to make it five lanes each direction so the construction bottlenecks in that area. I find it hard to believe that people can stand it driving through every day to commute. It will be very nice when completed but right now has to be frustrating.


Anyway back to my story the service was in South Seattle at a dear friend of Bronwen’s named Scott house. It was a little bit crowded because more people came than what was expected but everyone was able to fit in. Besides the stories we heard there were three scriptures read along with singing a couple songs that included an original version of the Lord’s Prayer. Bronwen’s sisters along with her cousins led the singing arm to arm. The service was a little unconventional however I have to say that Bronwen was unconventional herself. One of the major reasons we all loved her.


It had been quite a few years since I had been to South Seattle. I have driven Interstate 5 by there on many occasions but never stopped there. Scott’s house was very nice and I would say likely was built in the 80s. Looking east you can see Mercer Island with Lake Washington and seeing north is Lake Union which I have shown a couple pictures from Scott’s house. In fact the boat along the shore of Mercer Island belongs to co-founder of Microsoft Paul Allen.


Most of my trips to Seattle has been to downtown where the Space Needle is and going to the waterfront to visit the Pike Place Market. Two places hundreds of thousands visit each year. Usually I go both places taking the ferry from Bremerton. The Seattle Mariners and Seahawks have their stadiums not too far from the waterfront. You can walk or take a taxi ride very easily.


On the North side of Seattle is where the three main universities are. The University of Washington you can see and go to on the east side of Interstate 5 while Seattle University and Seattle Pacific are on the west side. They are not far from each other and the distance to the University of Washington is not far either. So if you are a student at any of the three colleges and you have friends at the other two seeing them can be very convenient.


There are a lot of neighborhoods that are very interesting to visit throughout Seattle where you can eat all kinds of international food. My cousin Jennifer who lived in north Seattle until recently when her husband Holt and her decided move to Astoria, Oregon which is on the coast; visiting their home in north Seattle they took me to a Greek restaurant. It is not very big but it is elegant. All over Seattle not only other international restaurants there are plenty of places to get seafood as well. Seattle being on the Puget Sound the availability of local seafood is easy to come by well as getting salmon from Alaska. Whenever I am eating at a restaurant whether in Gig Harbor or Seattle I make sure that I have a cup of clam chowder; most restaurants have clam chowder on Friday’s however the ones that specializes on seafood you can get anytime.


The greatest thing I like to see coming back home going south through Seattle is the bright lights at night. It is quite the sight to see. If you a visit and want to go up the Space Needle you need a reservation usually in advance having either lunch or dinner. Otherwise you can go up to the top and see a view all around. You can see Mt. Rainer to the south and the San Juan Islands to the north along with seeing all of Seattle.


Visiting is always a treat for me although it is an hour drive I only go a few times a year primary with family. I have fine memories growing up and seeing Seattle. There is so much to see in Seattle so takes several days to see it all.


So Bronwen we miss you however we can’t wait until that day we can see you again.