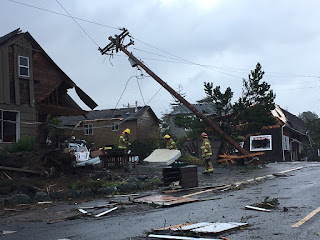 Manzanita Oregon hit by Tornado on the coast

This is one of those weekends that are best to stay inside most of the time. Here in Gig Harbor we have rain up to two inches the last couple days and more is expected today (Saturday). Besides the rain strong winds are expected in the early evening. Friday the winds got up to 44 miles per hour and it could be twice that amount tonight. We could lose electricity for several hours although where I live the power is located underground however the transformers above ground could go out.


We are fortunate this only happens about once a decade where we have high winds. The last one was December of 2006. I expect to go out for dinner at a friend’s house tonight but the chances are pretty good that it will be cancelled. I am confident of my own driving no matter of the weather however they could be without power or trees could be down and roads being closed.


The high winds have already hit the Washington and Oregon coasts on Thursday and Friday. A tornado hit one small town on the Oregon coast that caused plenty of damage the mayor declared a state of emergency. It was reported on Friday that Mt. Rainier had winds of up to 100 miles an hour. I don’t expect that we will have such winds but 50 to 75 miles per hour would not be a surprise.


So now you see likely I will be staying indoors most of the day. I probably will be going out for coffee this morning and get some added food supplies. Depending on the electric power staying on may be watching a lot of football, baseball and some movies on television today. Not a bad way to spend a day especially if it only happens every decade or so. I just hope not a lot damage happens in the area. Everyone have to change their plans. Not a good idea to be on the roads when heavy rain and strong winds happen. Don’t want to run into a nasty downed tree plus it will take a lot longer to get anywhere. Wherever you are stay safe I certainly know I will.