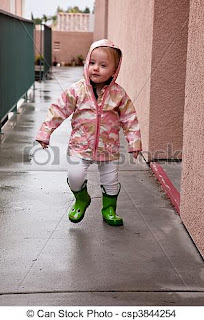 
The rain we had here in Western Washington on Thursday that will continue through the weekend with strong winds reminded me how people dress when it comes to rain.


On Thursday we had rain of up to two inches depending where you were. That is a lot more rain than we are accustomed in having on one day. Usually when we get rain it is about a quarter of an inch or less. Right now it continues to pour hard and I would not be surprised with another couple more inches.


So this comes to me on how people here dress for rain. Thursday I wore a rain jacket that I actually bought on Wednesday nice I really needed a new one. I wore a baseball cap under my rain hood since it is hard to see with the hood only. I saw some people running or walking fast wearing no rain jacket or using an umbrella. It is interesting that more umbrellas are sold in Los Angeles than in Seattle while the people of Los Angeles have fewer sunglasses than in Seattle. You would think it would be the opposite since Los Angeles has more sun during the year and Seattle has more rain.


When it comes to umbrellas I find it a surprise when someone is using one. I actually have an umbrella but I seldom use it. The only time I would use an umbrella would be if I am walking several blocks to my destination and that doesn’t happen too often. Another thing when we have heavy rain often the wind blows enough that it is hard to keep hold of the umbrella in the right fashion so I find it useless to use.


The rain we are having right now does happen very often. Only a few times of the year during the fall and sometimes in winter and spring does the rain come down hard. Most of the time it is a light rain so my rain jacket is all I need and I don’t walk very long distance unless I am on a trail for my daily walk. Those times I usually walk when it is not rainy or light rain. When we see someone using an umbrella I figure that person is either a visitor or has not lived here long. Natives in general don’t use umbrellas. Even when I was a child waiting for the school bus I would wear a rain jacket only even during the down pours. Like most places the natives have their own way of doing things and here in Western Washington is no different. Most time of the year people here will wear light clothing even during the winter unless it gets around freezing. We are not affected most of the year by the temperatures. Although some people do wear long sleeved shirts I don’t most of the time. I would only do so when it gets around freezing and it snows. Also I wear winter gloves when the temperatures drops low and I feel that I need them. I make life simple especially when it comes to dressing.
on October 14, 2016