On Wednesday it looks like I will finally be heading north to British Columbia to visit a couple of my cousins Susan and Christy. I call it the past meeting the present or may be childhood meeting adulthood.


Originally I was going to see them in July however the wild fires where they had to evacuate postponed the trip. It will be interesting to visit in the fall instead of the spring. The alternative would have been to wait until next spring or summer however with mother can’t tell how much time she has left so no better than the present. Yes mother is going with me. It will be a two day drive each way to reach where they live. Susan lives further than Christy so we will stop at Christy’s first. Susan and her husband own and run a ranch while Christy lives on a lake where there are not a lot of people living so when I go out for my walks more likely see wildlife over cars and people. What that wildlife is can be anyone’s guess.


Susan and Christy are both older than I so they know my history as a small infant too. In fact I would say they know more about me at that time than I do. Actually anyone who knew me as an infant would know more than me. My memories of the first four years of my life I don’t remember at all and even those from five through seven are sketchy at best. It has a lot to do with me being burned when I was four years old and I almost didn’t make it. I was cooking eggs on the stove when my pajamas caught on fire. I spent six weeks in the hospital I have been told.


It will be a good time to catch up on what is the present along with stories of the past. Sort of like when my sister and brother visited last week. Most likely I will hear some new stories of the past that I haven’t heard before or memories of ones that I have heard. Whatever the case it will be really great to see them and adding some new memories. It is always nice to see family even if it is only once in a while. So you may not hear from me for a few days. You can catch up with some of my previous blogs if you would like. I will write still the next couple days before leaving. Until next time have a good time. 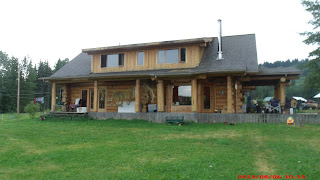 Cousin Susan's House on my last visit four years ago
on September 25, 2017