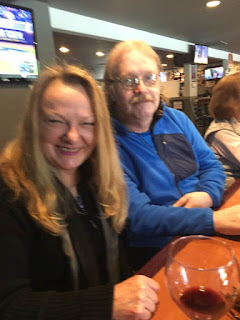 Classmate Darci and I  on Friday


Those of you who have read some of my posts know how important it is for me to meet with other people. I do prefer small groups however larger groups are OK as well.


On Friday I had lunch with a dozen of classmates that I grew up with. We met a local restaurant that is located at a golf course. I don’t golf so I haven’t been there very many times. We had lunch for almost three hours until it started snowing. A few came a little late which was fine. It was so wonderful to see these people who are all grown up.


In the past I have met classmates that don’t look anything like I knew them in school however this group looked about the same other than being older.  Three of them I hadn’t seen in a long time and possibly since high school. It is odd because all of them live within an hour of me and many very close.


Our graduating class hasn’t had very many reunions so we decided to get together four times a year. There were others who wanted to come but because of work or being out of town they couldn’t make it.


Our next get together will be in May and a couple days after my birthday. We decided to make it a Saturday so more people could make it. We may get into smaller gathering as well where we setup meeting times for a meal or coffee or other drinks.


We were able to set up a time to have an all class reunion to since it has been a long time. This one will take place in September at the home of one of the women who was there Friday. This will allow those out of town to be able to come as well.


Though I don’t see them very often as I have said there is something special about seeing those you grew up with. They knew you more than most and especially those you are friends with now. I spent more time with some of them then I did with my own family. We had class’s together and spent time in the lunch room along with being outside for recess. I find them still to be very special to me.


It was so wonderful to catch up with them and hear about their families along with other things they are doing in their lives. I know that not everyone wants to see others from those days because of awkwardness and how you were treated in school. I know that school was not always kind to me. These ones though on Friday I had good relationships with in general. Some I spent more time with then others primarily where we lived. I mostly spent my time with those who lived in my neighborhood and they did the same. What trouble you had way back then it is important to get over and be healed. This will make life so much better. Anyway this is my encouragement and have a wonderful weekend to you all.