Saturday night we had over 1200 lightning strikes in the Seattle area beginning around 7:30 pm.

I believe this is the first time lightning has taken place in September or at least in a long time.

The Washington Huskies football game had to be delayed for more than two and a half hours. They had to restore power as well.

I stepped outside for a moment. It was quite a sight to see. It was north of where I was standing and saw a bright light beyond the trees.

The lightning strikes went on for at least an hour and a half. I am sure many people lost power. Fortunately, where I live the power lines are underground so didn’t lose power.

The weather forecast never mentioned lightning would happen so they were surprised as anyone.

It shows anything can and probably will happen at any time. Enjoy your Sunday everyone. 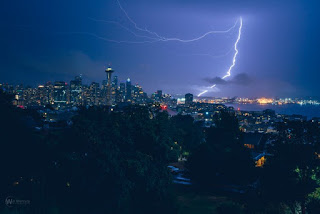 I told you how fantastic nights look in Seattle!